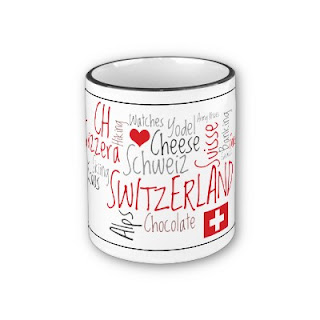 A lot of people around the world (mostly in the big country on the other side of the Atlantic Ocean) has big problems in knowing the difference between Sweden and Switzerland. Well, to be honest, it is easy to mix the two countries up.

Both are democratic, neutral countries that avoided both the first and the second world war. Both are outside of NATO (even though Sweden is getting closer and closer and Switzerland takes part in NATO PfP).

During the Cold War, Switzerland was a buffer zone between East and West, much in the same way as Sweden. As a result Switzerland together with Sweden still are considered to be neutral enough to supervise the armistice line between North and South Korea.

But there are also differences.

Switzerland is not an member of EU and therefore does not take part in the plans for a common European defence. Sweden on the other hand is very active in EU since the lack of a NATO-membership has resulted in the need to seek protection from another organisation. Much in the same way as Finland and Ireland, Sweden is instead very active in the EU Battlegroup koncept.

Switzerland is a new member of the UN (Sweden has since Dag Hammarskjöld been very close to the UN), but has like Sweden taken part in peace keeping operations. So far Switzerland has stayed out of peace enforcing operations such as Afghanistan or Libya. Sweden on the other side is planning to use its professional corps in a more aggressive way in the future. Libya might just be the start of it.

Switzerland has build its defence capability on a large conscript force numbering some 600.000 men. Sweden has recently changed its armed forces structure from a conscript system of about 800.000 men to a professional soldier force of full and part-time soldiers together with full time officers and NCO. There are some ideas about doing the same in Switzerland, but I think it will take a long time to switch the system since it has been a part of the Swiss tradition for many years. On the other hand, never say never. It took the Swedish government just a few years to change the system in Sweden. Only the future will show if it is successful or not.

Now the close connection between Sweden and Switzerland are about to get even closer. Switzerland has announced that Sweden and Saab is the favourite in the process of buing the replacement aircraft for the F-5 Tiger. 22 aircraft is planned. No contract has been signed yet and it is not even clear if it is the C/D-version of the Gripen or the future E/F-version.

Why Gripen? How could Gripen beat the Rafale (Switzerland has close ties to France) or the Eurofighter? The Rafale and the Eurofighter are both twin-engine aircraft with a lot of power and a capability to carry a lot of ordnance.

The minister of defence in Switzerland, Mr Ueli Maurer stated that Gripen was maybe not the best aircraft, but that it was good enough for Switzerland and the price was about 33% less than the competitors. The maintenance cost per flight hour is about 1/10 of that of Rafale or Eurofighter.

But the low prize and high bang-per-buck factor might not be all.

Switzerland might get more cooperation from Sweden than from France or UK. There will most likely be a lot of industrial cooperation or off-set affairs. I would guess that the assembly of the aircraft will be done in Switzerland. Companies like Ruag and Zeiss will be sub-contractors. There are also rumors about Sweden buying Pilatus PC-21 as the future lead-in trainer for the Swedish Air Force to replace the ageing Saab 105 (SK 60) fleet. Since Saab is providing training by the hour to the Air Force this might be a very fast transition into new aircraft without the need of Swedish Government approval or a need to follow EU regulations regarding keeping the bidding process open for everyone.

Gripen is also ideal for the Swiss tactics.

The A/B-version of the Gripen was designed for specific Swedish tactics. The C/D-version has been re-designed for NATO-tactics with among other things Link-16, Have Quick, Air-to-Air refueling etc.

Switzerland has a tactic of using road-bases for aircraft operations in war-time. It is a tactic that was developed by German Luftwaffe during WWII when the fixed airbases was bombed and instead the Autobahn was used for aircraft operations. The Gripen is designed in a similar way to take-off and land on 800 m short strips that was part of the Swedish dispersed base system BAS-90.

The F-5 is today mainly used by the Swiss Air Force Reserve. Pilots and maintenance personnel that on a day-to-day basis work in civilian airline companies but during parts of the year fly and operate the F-5. The Gripen is designed to be very easy to fly and maintain. In the Swedish Air Force the aircraft usually were maintained by conscripts with some 6 months of training. All aircraft equipment have self-diagnostics and can easily be replaced on the flight line. Replacing the engine can be done within a few hours on the flight line or in maintenance tents.

From a training point of view Sweden has one very unique capability. That is the vast and sparsely populated areas in the northern part of Sweden. The training ranges are among the biggest in the world. Here low-level flying can be trained without any complaints from the locals. At the Vidsel firing range all type of AA/AG-weapons can be used (including AIM-120 AMRAAM). Switzerland has previously deployed to Sweden with their Mirage fighters for this type of training. My guess is that Swiss aircraft will be a frequent flyer to Sweden in the future. When Switzerland use the same aircraft as Sweden it will also be much easier since a lot of the needed infrastructure (ground support units, generators, fuel, spare-parts, consumables etc) are already in place at the Vidsel Airbase.

But first of all the contract need to be signed. My guess is that the Dassault and Eurofighter consortium will do their best to interrupt the negotiations. There are talks about a national vote in Switzerland. But this will not be to select a more expensive aircraft instead of Gripen. It will be a choice between buying a new fighter or cutting down on the Swiss Air Force to only F/A-18 and in the future nothing at all. But the Swiss people still remembers WWII when they were very close to be annected by Germany. Therefore I doubt they will cut down on their defences.