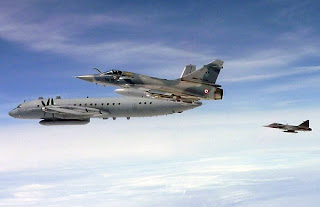 The Swedish defence policy has during the last years focused on international operations. The national defence capability to stop invasion of Sweden has been demobilized and a lot of hardware has either been scrapped or sold on the second hand market.

Instead of being a neutral country between NATO Norway and Denmark and the Warszawa pact Russian Baltic states, Poland, East Germany, Sweden has moved closer and closer to NATO. First only as an observer taking part in NATO PfP exercises, but nowadays more NATO compatible then most NATO countries.

As of now the Swedish Air Force is part of the NATO United Protector mission against Libya. But there are still Air Force activities in the Baltic region.

The Swedish Air Force has been involved in the NATO PfP exercise BALTOPS. COMAO - Composite Air Operations has been trained together with units from other NATO countries and led by NATO E-3 AWACS.

In the Baltic states, NATO is responsible for the QRA - Quick Readiness Alert to guard the air space. As of now the French Air Force has replaced the previous JG 71 Jagdgeschwader Richthofen old F-4 Phantoms with their Mirage 2000. An interesting fact is that when Germany replaced the Czech Republic Gripen fighters in with their new Eurofighter Typhoons in 2009 they had serious problems with the availability of the Eurofighter. They had to repelace the Eurofighters with F-4 Phantoms after only a week of operations. Since Germany are still using the F-4 for QRA missions in the Baltic states there must still be technical problems with their Eurofighters. The German F-4 pilots use the nickname "Der Wunderwaffe" for the Eurofighters.

During the German session in the Baltic region there was time for a joint exercise with the Swedish and the Lithuanian Air Forces. This was the first time that the Swedish Air Force took part in NATO QRA training exercises, see the film below.

Sweden is part of NATO operations in Afghanistan and in Libya, and now the Swedish Air Force take more or less official part in NATO QRA. When will the Swedish politicians officially acknowledge full Swedish NATO membership?