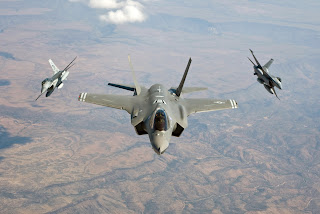 A major Twitter-fight is now taking place between representatives of Lockheed Martin and US senator McCain.

On 13 July, Lockheed Martin tweeted that the F-35 is showing "significant progress", which drew a quick response from McCain via the same online medium.

"To most observers, a $771M cost overrun for 28 F-35s doesn't qualify as 'significant improvement.' Taxpayers deserve better," he wrote.
The dispute could set up a clash in final negotiations over the Fiscal 2012 budget. The Department of Defense has asked for another $264 million to pay the initial overage costs. If McCain succeeds in blocking the additional payment, the money would have to be found somewhere else or F-35 orders could be reduced.

The first rumor stated $771 million in overruns, but that estimate has now been almost doubled.

The $771 million reflects the impact of the 2004 weight reduction redesign on Lockheed's production system, the company said. The redesign carved off thousands of pounds of excess weight, but suppliers could not keep up with the flow of design changes. That led to late delivery of parts, then extra labour hours to install them outside of the normal manufacturing sequence, it added.
...
"The F-35 team is focused now on any opportunity to reduce the concurrency estimate and improve the final cost-to-complete on these early production lots," Lockheed said.

$771 million yesterday, $1.15 bn today. And this for the first 28 aircraft. What will happen in the future for the next 2.443 F-35 expected to be bought by US Armed Forces? Obama has a hard time with the budget and the Republicans. He will be forced to make some cut downs. But where?

Rather, the president appeared to be preparing for the ongoing debate on the issues of the debt, spending and taxes in next year’s presidential election.
...
Even before Mr. Obama’s news conference, Republican House leaders told reporters that they planned a vote next week on a plan that would increase the debt ceiling in exchange for $2.4 trillion in spending cuts over 10 years and the passage of a balanced budget amendment.

This crisis may be over soon, but president Obama might be forced to make some serious cuts starting next year. 2012 is the presidential election and it will be up to the voters where the cuts will be performed. Do a majority of the voters prefer spending their money on the ongoing war in Afghanistan, buying new aircraft, paying the salary to government employees or letting their war veterans get their pensions?

My bet is that the F-35 program will have a hard time getting more money for future cost overruns. Most probably there will be reductions in the number of F-35 bought by the US. I also believe that US will keep one of the teen-series of fighters as an alternate aircraft program for European countries with bad economy if they can not afford the F-35 for a number of years.