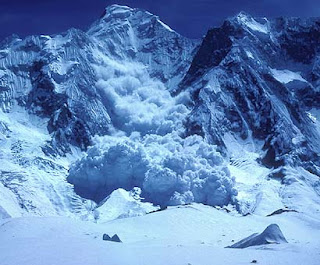 The Afghan winters can be very cold and normally the Taliban fighters cease fighting during the winter season. Avalanches are a rare thing during the winters and even less this time of the year. But I bet that Mullah Omar can hear the rumbling sound of the avalanche that will start when the US troops start their tactical retreat from Afghanistan.

President Obama plan for removal of the troops has a very tight schedule.

Mr. Obama announced plans to withdraw 10,000 troops from Afghanistan by the end of this year. The remaining 20,000 troops from the 2009 “surge” of forces would leave by next summer, amounting to about a third of the 100,000 troops now in the country. He said the drawdown would continue “at a steady pace” until the United States handed over security to the Afghan authorities in 2014.

Slovenia has decided to pull back their troop contribution to ISAF. When USA leaves, this will also give an official go-ahead for other countries to leave. Countries that were not happy with being in Afghanistan, but needed to show NATO/USA how much they want to cooperate will be the first to leave. The Dutch has already left the country and France will also reduce their troop contribution.

President Karzai was positive to the removal of the US troops. However reading between the lines one can guess that he will start to cooperate with the Taliban in order to stay alive in the future. The afghan people also realizes this.

“During the Taliban regime there were no suicide attacks, but since these people have shown up in our country we have faced lots of adversity,” said Nasrullah, a shopkeeper in Kabul’s dilapidated downtown, who like many Afghans uses only one name. “When they leave Afghanistan, the Taliban will stop fighting; it is only because of these foreigners they are fighting.”
...
“This drawdown will embolden the morale of the Taliban, and actually it has already emboldened them,” the elder said. “The Taliban are saying to the elders not to support Americans or you will be killed, and now they say, ‘The Americans are leaving and your lives will not be spared.’ ”

In the senate the US politicians are talking about all the positive things that have been accomplished during the US/NATO rule. But will it remain so when the foreign troops leave the country? I seriously doubt that.

The war will most probably change from Counter Insurgency to Counter Terrorism. Instead of troops on the ground the US will support the afghan forces with Close Air Support, UCAV attacks on Taliban leaders and UAV and satellite surveillance.

How will Sweden react to the US withdrawal?

- Less troops in the south will give the Taliban the possibility to either take back lost territory in the south or reinforce in the east and the north where there up until now have been a relatively low-intensity war. This can result in heavier fighting in RC North and in the Swedish/Finnish PRT in Mazar-e Sharif. If the Swedish personal losses increase it can end in a public out-cry to pull back the troops ASAP. The Swedes are supporting the war in Afghanistan, but if the cost is to high the support will diminish.

- The Swedish politicians have publicly decided to start pulling back Swedish troops during 2011 in order to have completed the hand-over of the security to Afghan troops in 2014 when most of the Swedish troops will be sent back home. This clearly is a direct copy of president Obama plan. But can Sweden follow their intentions if the security level in PRT MeS is reduced? Or will the Swedish politicians just use the US withdrawal as an excuse to leave Afghanistan in the same way as Slovenia is doing?

Unfortunately, the US plan reminds me of the withdrawal from Vietnam. First a "surge" in 1972 with the Linebacker campaign to bring the north Vietnamese to the negotiating table in Paris. Then a pull-out of US troops and a Vietnamization of the war using South Vietnamese troops to do all the fighting and ensuring the public safety. However the South Vietnamese were not able to stop the north from invading and in 1975 the last US helicopters left the US embassy in Saigon just as the first North Vietnamese tanks entered the city.