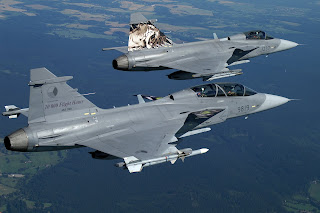 The Czech Air Force has been leasing their JAS 39C/D Gripen since 2005. And the pilots and technicians has truly shown that they have mastered their new aircraft. During these years they have been transforming from old Mig-21 to a 4:th generation aircraft with datalinks and swingrole capability (possible to change mission type from air-to-air to air-to-ground while airborne.

If you ask a Czech pilot or technician they are very proud of what they have achieved during these six years. This is clearly shown in the popular yearly 211 squadron Gripen calendar. In Sweden the Gripen PR-staff is blushing, these type of pictures are not allowed in Sweden any more. But who cares, everyone else likes these calendars!

- During 2009 they took part in NATO QRA - Quick Readiness Alert over the Baltic countries. With only 14 Gripen aircraft in the Air Force they managed not only to have two aircraft plus one spare in high alert over the Baltic Sea. At the same time they had two more aircraft plus one spare in NATO QRA over the Czech Republic! The aircraft in the Baltic QRA performed more Aplha Alerts than any other NATO country that has taken part in the Baltic QRA. This is good example of the availablility and easy maintenance of the Gripen. The German Air Force took over after the Czech Republic with their new Eurofighters. They could however not get their aircraft working after landing so they asked the Czech to keep their Gripen at the base for another day. A few days later the Eurofighters were replaced with old F-4 Phantoms!

- In 2010 the 211 squadron won the Tiger Meet Trophy as best squadron. This clearly show that the squadron know how to use their aircraft and that they and their aircraft are fully NATO-compatible. 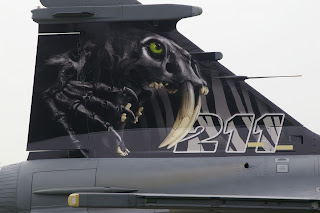 The Gripen squadron has been very busy "painting" their aircraft!

The Czech Air Force have only 14 Gripen (2xJAS39D two-seater and 14xJAS39C one-seater), but they are producing a lot of flying hours each year. As a fact when it comes to producing flying hours per air craft they are the top-producing Gripen user in the world. One result is that Major Otokar Prickner recently became the first non-swedish Gripen pilot that reached 1000 flying hours in the Gripen!

As a complement to the Gripen, the Czech Air Force have one squadron with Aero Vodochny L-59 "Elka" or "Super Albatros" as they are known in the west.

The Czech Air Force focus on air-to-air missions and thay are very good at it. Armed with AIM-120 AMRAAM, AIM-9M Sidewinder and 27mm Mauser guns the Gripen is a very potent fighter. The Czech government has decided that the air force shall focus on homeland defence and NATO QRA.

The existing Gripen leasing contract ends in 2015. Lockheed Martin is doing their best to sell updated F-16 aircraft to the Czech politicians. But I believe that if the pilots have anything to say about it, they would like to go on using their Gripen. After all, why change aircraft when you have invested a lot of years and money to learn about how to use the existing Gripen aircraft and when the one you have is working very well?

Read more at the 211 squadron homepage.