The cost of transformation 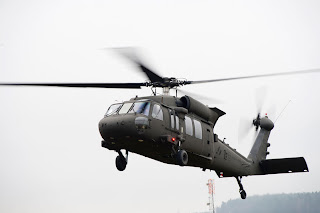 Saab AB has received a contract to perform maintenance on the Swedish Air Force new HKP 16 UH-60M Blackhawk helicopters. Good for Saab, but how come Saab ended up with he contract? Their main profession is after all building Gripen fighters, or...?

The Swedish Armed Forces is undergoing a painful transformation process. From a force of 800.000 men based upon a conscript system to a force of some 60.000 based upon professional full-time or part-time soldiers.

As a part of this process the Armed Forces Headquarters forced every officer to change their contract. It used to be voluntary to apply for international service, but with the new contract it is mandatory. This at no increase in the salary. The choice were between getting fired or accepting the new contract.

Unfortunately for the Armed Forces some of the most specialized officers (and trained at a high cost for the Swedish tax payers) choosed to leave their employment. Among them many helicopter engineers at Malmslätt AFB outside of Linköping. Specialists on HKP 15 and HKP 14.

This resulted in a lack of knowledge and manpower during a very hectic period of training. The HKP 15 - Augusta A109 was ready to deploy as part of the EU Battlegroup (is was later changed when a Croatian helicopter unit was contracted), the HKP 10 - Super Puma was deploying to Afghanistan as part of ISAF MEDEVAC and the HKP 14 - NH-90 was slowly being delivered to Sweden.

At this critical moment the Air Force lost their most experienced helicopter maintenance engineers! Their new employer became Saab AB. It is after all only some 10 kilometer between Malmslätt and Saab AB.

The result of this was that the Air Force needed to buy the competence back from Saab AB. During 2011 Saab received a contract to perform maintenance on the HKP 15.

Helicopters is after all not a new competence at Saab AB.

- Saab was already a sub-contractor in the NH-90 contract. The main task was to deliver the tactical planning system, TMS. Unfortunately this contract has resulted in a huge financial loss for Saab. The contract was worth 2 Bn SEK. Saab has, according to Swedish news, so far lost approximately 600 MSEK on that contract and the system is still not combat ready.

- Saab has been cooperating with Heli-One in Norway (part of the planned Gripen sales to Norway.) Heli-One was the company involved in the MEDIVAC modification of the Swedish Super Puma.

- Saab is also cooperating with Finnish Patria regarding maintenance of helicopters.

Saab is also not the only Swedish company with a sudden interest in helicopters. Volvo has been preparing to perform maintenance on helicopter engines by cooperating with Norwegian Astec.

So, the result for the Swedish Armed Forces is that they lost some experts on helicopters at a critical moment and needed to buy them back from the industry. Most probably at a higher cost. The Armed Forces will loose the capability for heavy maintenance on helicopters and will depend on the industry to support them on international missions. It will be very interesting to see how the industry will support the UH-60 when they deploy to Afghanistan during 2013.

The Swedish Armed Forces has a plan to use more civilian contractors for work that is not part of the combat missions. In Sweden this is is called OPS - Public Private Cooperation. Unfortunately they have not examined in detail the experiences from USA and the UK where the Governments has changed their ideas. It is not cheap to let the industry do the work and it can also be difficult to use civilian contractors at a front-line unit. Unfortunately in this case there were no other choice than buying back the competence that the generals did not want to keep. Cooperation by necessity rather than by choice.

It is not only the Armed Forces that has problem with helicopters in Sweden. The Swedish government has sold out medical transports and sea rescue to a civilian company, Norrlandsflyg. Unfortunately the cost for this service increased and the govenrment had to add extra money outside of the contract. The contract was therefore revoked.

There has been a number of investigations (report "Helicopter Support to civilian society" in Swedish)in the Swedish Government to find the reason behind all delays and increases in cost. But so far not very much has happened. None has taken the blame for the situation becoming what it is.

Summary: The Swedish tax payers has lost a lot of money on the helicopter "affairs". So far the Armed Forces has received very little capability. Hopefully this will change with the introduction of the UH-60. But the Armed Forces will as a result of loosing much of the competence regarding maintenance of helicopters be very much in need of continuous support from the industry. At a certain cost of course!